So Hardworking But You Don’t Have Brains 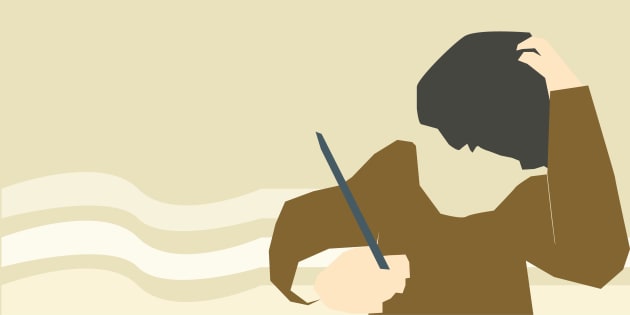 For the same thing,

He would work for 4 hours,

After all, he wanted success,

whereas I needed it.

I remember that throughout my life as a student and as a topper, people have called me hardworking, they have called me ambitious, they have acknowledged that I am strong and independent, that I am determined and confident. But no one in my life, like literally, no one, ever, even accidentally or inadvertently, explicitly called me “intelligent”, “intellectual” or “smart”. In fact, I remember how a few teachers even pulled by ears and asked me to focus on being smarter rather than hardworking.

They would ask me to learn from many other students to be smart. Now, these were students that I often thought of as careless, undisciplined and lazy. I remember how I once felt extremely bad for a week when my favourite maths teacher told another student to take a cue from my hardworking nature, adding that it was only the effort I put in that allowed me to score 99% marks since I didn’t have the brains for it.

In such moments, I’d try to console myself by recalling all the times I came up with an innovative idea or how I handled a particular situation, but these tricks would not work for me for long.

I was a child of the slums and had very little exposure to the world outside at that time. I was prone to second-guessing myself.

I was a child of the slums and had very little exposure to the world outside at that time. I was prone to second-guessing myself. At times, I would hate myself in my class 11th and 12th for working hard.

Sometimes, I would try hiding from people that I was working because I wanted to show them that I could finish my tasks in a short time. I sometimes lacked self-respect.

But when I cleared the Common Law Admission Test (CLAT) in my first attempt and got a place at the prestigious National Law University at Kolkata without any coaching and by preparing only for 25 days; when I cleared the entrance exam of the IIM-Indore’s Five Year Integrated Programme in Management (IPM), again without any coaching and by studying only for three days; when I cracked all other competitive exams around the same time, in that one month, I was strongly convinced “for the first time” that I was not only a hardworking person but also blessed with a sharp mind.

Then, at my law school, when I met the toppers of different schools, and when I got the chance to work with them during our assignments, papers and moots, etc, the realization was reinforced that I too had brains and I was not a frog in the well. But, even then, people at my college would call me hardworking; never once did any one of my batchmates acknowledge me to be witty. But, I longer paid heed to that.

For a very hardworking person, success is imperative, while for others it might just be a matter of “want”.

Now I have realized that being excessively hardworking does not always mean that you are any less intelligent or that you are in any way not smart. It may simply mean that you invest so much effort in your tasks for certain reasons.

1. You are afraid to lose

I remember how when I wanted to become an all-India CBSE topper in my Class 12th, I would study for some 15 hours a day without a miss throughout the year. On the other hand, some students would study only during the last three months of the academic year and would score the same as me. But, it is important to understand here that I studied so much not because I needed to but because I was really apprehensive about missing my dream college in case I scored low. Therefore, out of my fear of scoring less, I would study more than what was actually needed.

2. You wish to avoid guilt in case of failure

As an individual entity in this big world, what we have in our control is how much we invest in any work we do. But no matter what we do, however hard we try, success can never be guaranteed. We can only increase or decrease the probability of it through our work. So, getting success or failure as the end result is something which no one can control. Therefore, some people, work hard so that even if they do not get success, at least, they would never be left with any guilt or regrets later in life — that had they done something more, then they might have been successful. So, working extremely hard enables people to tell themselves later that they did whatever they possibly could have with respect to a particular job. This avoids a feeling of guilt when there is failure.

3. You have now become rigid about working hard

Working hard is a matter of habit and not a matter of chance. So, one may work hard for anything simply because that is how one is. In fact, there comes a stage in one’s life, when one becomes so used to working hard that one feels afraid of choosing the alternative of working in a manner which requires less input.

Their prejudice is that hard work is a compensation for incompetence. They cannot understand that you work hard because you just cannot help it!

Either or all of the above-stated reasons exist behind a person’s excessive hard work whenever she thinks that a certain goal is extremely important for her. For such a person, success is imperative, while for others it might just be a matter of “want”.

However, I’m not trying to say that one should become excessively goal oriented or that one should fear failures. What I want to drive home is that just because someone works harder than others it does not mean that she lacks brains or competence. It just means that she is extremely cautious and passionate about her goals. Hence, many a times, extremely hard work is a matter of attitude or habit or fear instead of it being a matter of “need.”

Very often, people do not appreciate your intelligence when they see you work hard. This belief is a mechanism by which they console themselves. They tell themselves that the only reason you’ve achieved something that they could not is because you’re a donkey who slogged all day while they did not. Their prejudice is that hard work is a compensation for incompetence. They cannot understand that you work hard because you just cannot help it!

Therefore, if you are a hardworking person, stop feeling guilty for working hard!

Report and write stories for Indianspice.co.za. It is our ambitious goal to cover issues/events/news concerning South Africa and the diaspora.
@spiceofi
Previous PHOTOS: Lakmé’s Plus-Size Models Revealed
Next How To Throw An Indian Wedding!