“It” is the controversial little scrap of papyrus, written in Coptic, that seems to have Jesus referring to “my wife,” in contrast to the traditional stance that affirms Jesus’ perpetual bachelorhood.

The quick backstory: In 2012, a Harvard professor, Karen King, brought this papyrus to the attention of scholars and the public.

Both the material and the script looked authentically ancient at first glance, and though the notion of Jesus having a wife was remarkable, these “lost” Christian writings, such as the Gnostic Gospels, are full of unorthodoxies.

It was good enough for King, who is widely respected in the scholarly world.

From the beginning, there were doubts, however, beyond the unlikelihood that the tiny scrap that survived the centuries would happen to be the one that contained the reference to Jesus’ wife.

The papyrus, along with a few other ancient papyri of lesser novelty, had been passed to King by an anonymous figure.

Anonymity, in the world of antiquities, is often a bad sign, compounding the inherent uncertainty when dealing with texts that are bought and sold rather than discovered in a firm archaeological setting.

Then there were aspects of the text itself that seemed suspicious.

For a fragmented scrap of papyrus, it seemed to have an awful lot of important content on it. Not only did Jesus refer to “my wife,” he also potentially described a certain Mary – perhaps Mary Magdalene? – as “worthy” and capable of being a disciple.

It is (almost) too good to be true.

At the same time, the handwriting seemed surprisingly sloppy.

Then again, other scholars noted that just because a scribe has poor handwriting and a text is informative does not make it a forgery. Perhaps we just got lucky this time.

More specific issues arose in the perceived familiarity of the document.

The text of the Jesus’ wife fragment is remarkably close to published editions, available online, of another Coptic Christian text, called the “Gospel of Thomas.”

So close, in fact, that one of the typographical errors in an online edition of the “Gospel of Thomas” is replicated, uniquely, in the Jesus’ wife fragment.

What are the chances of that?

Yet some would say that the fact that there is considerable overlap with the wording of the “Gospel of Thomas” isn’t a problem: Christian authors regularly copied word-for-word from other texts.

The canonical Gospels of Matthew and Luke, for example, reproduce much of the Gospel of Mark, with only slight alterations. And the vocabulary used in the papyrus is remarkably common.

The most compelling argument for authenticity is the flip-side (or verso) of the manuscript.

There are faint traces of ink on this side that have been worn away, suggesting that they are truly ancient.

It would be highly unusual for a modern forger to get his hands on an ancient papyrus written on only one side and equally difficult to imagine how the verso might have been made today.

Yet for all the arguments and efforts, there was no smoking gun – on either side.

And so the papyrus was submitted for testing: carbon-dating of the papyrus itself as well as chemical testing of the ink. Just last month, those test results came back.

Of course, tests like those can’t really prove authenticity; they can prove only potential authenticity. And they are hardly foolproof.

Like steroids in sports, it’s safe to assume that the best bad guys are always one step ahead of the science.

And yet, the dating of the papyrus and ink did shift the burden back on to the doubters. And just this past week, they seem to have discovered something as close to proof as we can really expect in cases like this.

Although we knew in 2012 that there were other papyri in the same group that included the “Jesus’ wife” fragment – the batch the anonymous donor gave King – none of them had been seen.

That changed with the release of the test results, which used some of these other papyri for the purposes of comparison.

One of those papyri was a fragment of the canonical Gospel of John. For all the uncertainty about the Jesus’ wife papyrus, this text of John evoked no such indecision. It is a forgery.

How do we know? This Gospel of John purports to be a version in a relatively rare ancient dialect of Coptic known as Lycopolitan.

Just such a Lycopolitan version of John was published in 1924 and is now available online. And this newly revealed gospel fragment just so happens to look awfully similar to the 1924 (now-online) version of John. How similar? Here’s how similar: 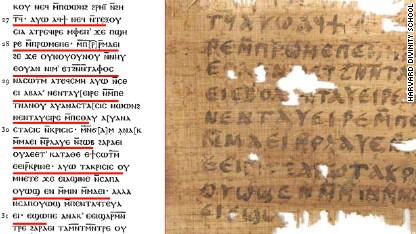 Herbert Thompson’s “Gospel of St John,” page 7 (left); Coptic John fragment recto (right), illustrating how a forger could have copied every second line of this text.

Whoever created this new Gospel of John fragment simply copied the beginning of every other line from the online version.

Turns out that if you check the other side of the fragment against its online parallel, the same thing is true (though with the end of every line rather than the beginning, logically enough).

Add to this the fact that the carbon dating of the John papyrus puts it in the seventh to ninth centuries, but Lycopolitan died out as a language sometime before the sixth century. No one wrote anything in Lycopolitan in the period in which this text would have to be dated.

So what does it matter to the Jesus’ wife fragment that this scrap of John is forgery?

Well, it’s never a good sign for a text of doubtful authenticity to be found in the company of a sure forgery.

More directly: Multiple experts agree that the fragment of John and the Jesus’ wife papyrus are written in the same hand, using the same ink and even the same writing instrument.

Simply put: If one is a forgery, they’re both forgeries.

Although 100% certainty is never achievable in such cases, given everything we know now (lab tests included), the “Gospel of Jesus’ Wife” never existed — or, rather, it never existed, for all intents and purposes, before 2012.

There are no great revelations to be gleaned from this text, no astounding new information about Jesus or Mary.

What the entire episode does, rather, is remind us — scholars included — that science might not always have all the answers.

This forgery was detected not through lab analysis but through good old-fashioned humanities-based detective work. This was Sherlock Holmes, not “CSI.”

There remains no substitute for deep, thorough, scholarly expertise in ancient languages and texts.

Even in a case that ended up wasting such time and energy in the academic community, that community, and its collective body of knowledge, have rarely been more valuable and necessary.

Joel S. Baden is an associate professor of Old Testament at Yale Divinity School. Candida Moss is a professor of New Testament and early Christianity at the University of Notre Dame. The views expressed in this column belong to Baden and Moss.

Jahnavi Harrison On Life As A Hare Krsna Devotee

How Religious Lives Are Being Disrupted By The Coronavirus