#FraudTeresa, Why Her Sainthood Is Questionable

The canonisation of Mother Teresa may be a moment to unite the world in a moment of respect. But it also allows us to look back into research into what many consider not a life of saintly behaviour, but years of really good PR. 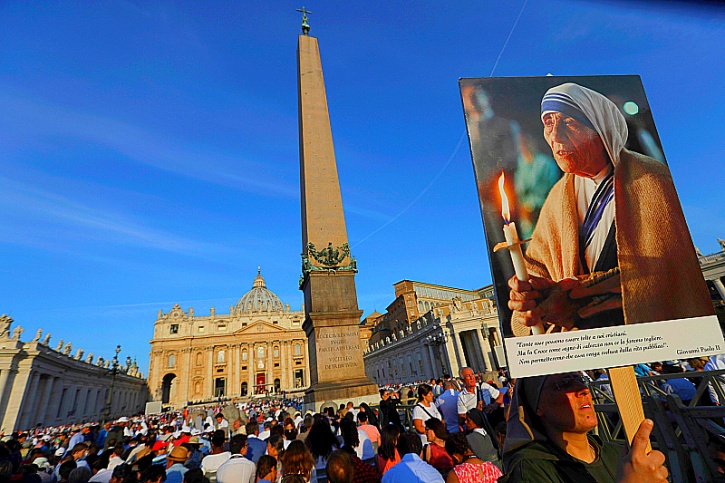 Here’s a few questions been raised about Saint Teresa, woman who can officially be worshipped, as of 2.15 PM today.

1. What did Mother Teresa’s organisation spend their tens of millions on?

There was a LOT of money flowing in; Susan Shields, who served the order for 9.5 years as Sister Virgin remembers: “It was a conveyor belt process: some sisters typed, others made lists of the amounts, stuffed letters into envelopes, or sorted the cheques. Values were between $5 and $100.000. Donors often dropped their envelopes filled with money at the door. Before Christmas the flow of donations was often totally out of control. The postman brought sackfuls of letters – cheques for $50000 were no rarity.”

A New York bank account even had about 50 million dollars – in one year, and worldwide inflows of almost $100 million per year.

What did they spend on?

i. Day to day expenses for the sisters?

Nope. “The order often receives huge donations in kind, in addition to the monetary munificence. Boxes of medicines land at Indian airports. Donated foograins and powdered milk arrive in containers at Calcutta port. Clothing donations from Europe and the US arrive in unimaginable quantities.”

The organisation was “run at practically no cost.”, and the sisters were not paid salary.

“Mother always said, we don’t spend for that,” Sunita Kumar, one the richest women in Calcutta and supposedly the Mother’s s closest associate outside the order. “If Mother needed a house, she went straight to the owner, whether it was the State or a private person, and worked on him for so long that she eventually got it free.”

When the sisters eventually showed their balance sheet (in England), revenue were Deutsche Mark 5.3 million in 1991. And expenses were DM360,000. The remainder was hushed up – Sister Teresina, the head for England said: “Sorry we can’t tell you that.”

Hemley Gonzalez, founder of a charity, came to India to serve at one of Mother Teresa’s facilities and stayed for 2 months. This is what he witnessed:  “Needles were washed in cold water and reused and expired medicines were given to the inmates. There were people who had chance to live if given proper care,” says Hemley.  He toldForbes of an “untrained volunteer wrongly feeding a paralyzed inmate, who choked to his death; and another where an infected toe of an inmate was cut without anesthesia.”

This was corroborated by Robin Fox, editor of the respected British medical journal The Lancet who visited the Home for Dying Destitutes in 1991: “Her order did not distinguish between curable and incurable patients, so that people who could otherwise survive would be at risk of dying from infections and lack of treatment.”

From Aroup Chatterjee’s book ‘Mother Teresa – The Untold Story”: The same cloth was used to wipe all the babies bottoms, and children were expected to defecate in open drains, which connected to the household drainage system. For nutrition, Monidyne, a powdered milk that lacked “absolute essentials like folic acid, vitamins K, B12 and C or D” was used to feed babies. In 2010, Forbes reported that a British TV crew “filmed children at Daya Dan, a care centre, tied to their beds. Volunteers spoke about sisters “shaking violently” or “beating” challenged children.

4. What about her miracles – which qualified her for a sainthood?

In 2002, the BBC quoted a rationalist group who said Monica Besra, allegedly healed by a photo of Mother Teresa of cancer, was still undergoing treatment afterwards, and had been in pain for several years afterwards. Doctors in fact said that it may persuade “illiterate and poor villagers” to “stop taking medical treatment for their maladies and seek miracle cures.”

In fact, her first miracle might have been really good photography
Researchers who looked into her her meeting in London in 1968 with BBC’s Malcom Muggeridge said that her “first photographic miracle”, should have been attributed to the new film stock being marketed by Kodak, not a halo that she looked ensconced in. In fact, this 1968 media appearance in the BBC, and the so-called halo reportedly sealed her title as “saint of the gutters” with both Indian and world leaders paying tribute to her work.

5. She took benefits from the not-so virtuous

Meanwhile, not everyone’s having a facts driven argument about Saint Teresa.

Report and write stories for Indianspice.co.za. It is our ambitious goal to cover issues/events/news concerning South Africa and the diaspora.
@spiceofi
Previous Canonisation Of Saint Teresa Completed
Next Anavarata Dance #BeatPeBooty With Tiger Shroff

How Easter Sunday Date Is Determined

Christianity: What is Good Friday?

Photo Story: Religion and faith in 39 pictures from 2017