After much furor, cinephiles will finally be able to witness Sanjay Leela Bhansali’s magnum opus Padmaavat in theaters across the country. But there is no denying the fact that the kind of turmoil that Padmaavat has went through to see this day is unprecedented in the history of Hindi film industry. Here’s what its lead actors Deepika Padukone, Shahid Kapoor and Ranveer Singhhave to say about Padmaavat’s release.

Deepika, who headlines the period drama as Queen Padmavati, not only expressed her excitement for the impending release but also thanked her fans for supporting her through the tough times. She said, “Padmaavat has been through so much. To see it finally releasing and the reaction it is getting is extremely overwhelming. I am very excited for the release tomorrow. Big day for all of us. On behalf of the entire crew, we want to thank you for being so supportive.”

But Padukone also added that she is going to watch out for the box office numbers of the film this time because she is pretty confident that they are going to be “earth-shattering.” She said, “It’s time for us to celebrate and see the film do wonders at box office. The best response is the one we can give to someone through the work we do. This time, I am excited about the box office because it is going to be earth shattering.”

On the other hand, Shahid Kapoor expressed how he was nervous regarding his character Maharawal Ratan Singh, husband to Queen Padmavati initially because people knew very little about the Rajput King. Speaking at an awards night yesterday, Shahid quipped, “Prior to Padmaavat I was nervous because people know very less of my character (in the film). It’s a very important film for me. It’s tough to essay a role like this. I feel thankful and honored. We’ve done everything, it’s time for people to decide what they feel.”

Meanwhile, Ranveer Singh was all praises for Sanjay Leela Bhansali for making the period drama Padmaavat. In his eloquent post on Twitter, Ranveer said that Bhansali has given him a gift for a lifetime with the character of Alauddin Khilji which also happens to be Ranveer’s first negative character. Here’s what he wrote, 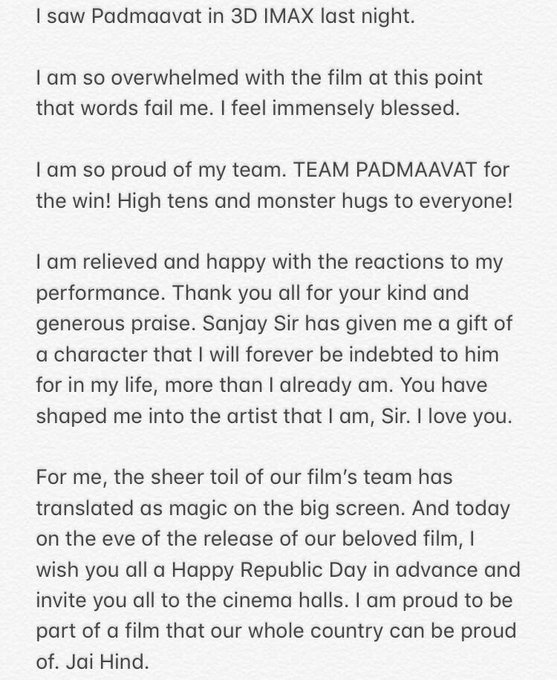 I am so overwhelmed with the film at this point that words fail me. I feel immensely blessed.

I am so proud of my team. TEAM PADMAAVAT for the win! High tens and monster hugs to everyone!

I am relieved and happy with the reactions to my performance. Thank you all for your kind and generous praise. Sanjay Sir has given me a gift of a character that I will forever be indebted to him for in my life, more than I already am. You have shaped me into the artist that I am, Sir. I love you.

For me, the sheer toil of our film’s team has translated as magic on the big screen. And today on the eve of the release of our beloved film, I wish you all a Happy Republic Day in advance and invite you all to the cinema halls. I am proud to be part of a film that our whole country can be proud of. Jai Hind.”

Report and write stories for Indianspice.co.za. It is our ambitious goal to cover issues/events/news concerning South Africa and the diaspora.
@spiceofi
Previous Frantic search continues for Ross Govender
Next SOTY 2 has a release date finally