After making a name for himself down south and in Bollywood with Raanjhanaa, Dhanush is all set to take his first steps in Hollywood with The Extraordinary Journey Of The Fakir. Based on the best-selling novel ‘The Extraordinary Journey of the Fakir Who Got Trapped in an Ikea Wardrobe’ by French author Romain Puertolas, the film has Dhanush playing a street magician, Ajatashatru Lavash Patel.

In the first look of the movie which has been shared by Dhanush on his Twitter handle, we first meet him as a young boy who comes from a very small part of Mumbai. He is an innocent kid who knows only about his neighbours and lands up in Paris when he grows up. Every frame in the teaser video looks convincing and Dhanush doesn’t fail to impress with his acting skills. Indian tunes of a tabla in the background sounds intriguing.

The director of the comedy-drama, Ken Scott, in the video, says, “Working with Dhanush and so many other actors from so many different cultures was truly inspiring. We shot in many different countries and it was very important for us to take advantage of these different settings. We wanted these different countries to impact the journey of the main character.” The Extraordinary Journey Of The Fakir has been shot in India, France, Italy, England and Libya. It also stars Oscar-nominated actors Berenice Bejo, Barkhad Abdi, Gérard Jugnot, Erin Moriarty and Abel Jafri. 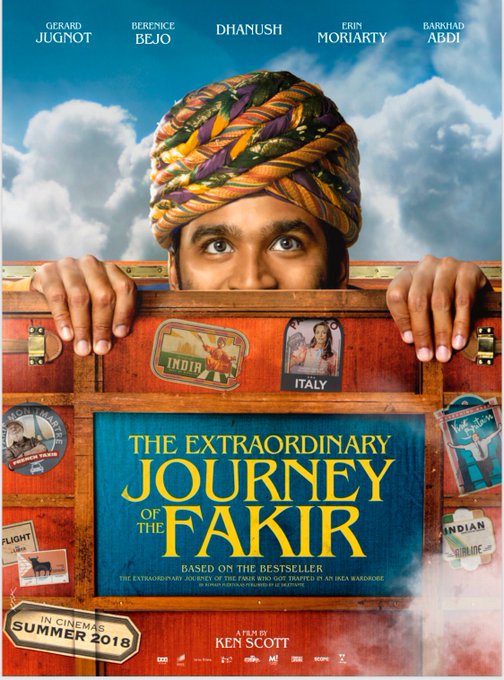 Talking about his first Hollywood project, Dhanush told IANS, “It’s God’s grace that I landed this offer. Although I have been offered three Hollywood projects, the script of this one really convinced me to sign it. It’s a very strong role. I play a character called Ajatashatru, a street magician. I believe what you spread out comes back seeking you. It’s such a positive film and it’s all about spreading positivity.”

The Extraordinary Journey Of The Fakir releases on May 30, 2018.

Report and write stories for Indianspice.co.za. It is our ambitious goal to cover issues/events/news concerning South Africa and the diaspora.
@spiceofi
Previous Samantha Akkineni slut-shamed her over vacation photo
Next Horoscopes of the week (Feb 11- Feb 17)