Rani Mukerji pens a heartfelt note on her birthday

Rani Mukerji pens a heartfelt note on her birthday

Hichki actor Rani Mukerji turns a year older today. Though Rani is not celebrating her 40th birthday, she has shared a heartfelt note for her many fans who have wished the best for the actor on her special day. The letter signed in Rani’s name has been shared on the social media handles of Yash Raj Film. Rani is married to YRF’s head honcho Aditya Chopra.

The first segment of the letter has Rani thanking the filmmakers who gave her such roles which helped her carve a niche in the industry. She writes, “Very rarely do we artists get material that can genuinely cause social change, cause change in attitude and thinking and I have been fortunate enough to get such content multiple times. I truly feel blessed. I thank all the film-makers who have trusted me with their characters. Your characters, your films, became my identity.” 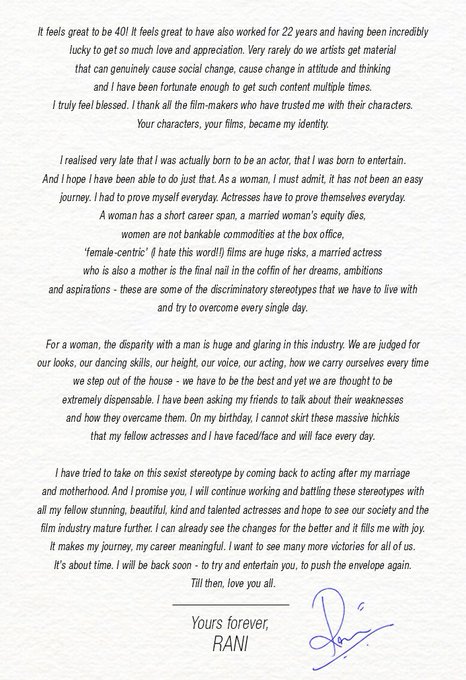 Moving ahead, the Hichki actor mentions about the struggles a woman artiste faces in the male-dominated industry. She also highlights the point of marriage and motherhood being the dead end for a female actor. “As a woman, I must admit, it has not been an easy journey. I had to prove myself every day. Actresses have to prove themselves every day. A woman has a short career span, a married woman’s equity dies, women are not bankable commodities at the box office, ‘female-centric’ (I hate this word!!) films are huge risks, a married actress who is also a mother is the final nail in the coffin of her dreams, ambitions and aspirations – these are some of the discriminatory stereotypes that we have to live with and try to overcome every single day,” asserted Rani.

To promote her upcoming release, Hichki, Rani has been asking her colleagues about their weaknesses and how they overcame them during the course of their career but coming to herself, she is unable to ignore that how she and her fellow female actresses are ignored over their male counterparts. She writes, “For a woman, the disparity with a man is huge and glaring in this industry. We are judged for our looks, our dancing skills, our height, our voice, our acting, how we carry ourselves every time we step out of the house – we have to be the best and yet we are thought to be extremely dispensable. I have been asking my friends to talk about their weaknesses and how they overcame them. On my birthday, I cannot skirt these massive hichkis that my fellow actresses and I have faced/face and will face every day.”

However, the Bollywood actresses of today are challenging the stereotype around their career post marriage by staying active and not letting their personal life hinder their professional growth. “I have tried to take on this sexist stereotype by coming back to acting after my marriage and motherhood. And I promise you, I will continue working and battling these stereotypes with all my fellow stunning, beautiful, kind and talented actresses and hope to see our society and the film industry mature further. I can already see the changes for the better and it fills me with joy. It makes my journey, my career meaningful. I want to see many more victories for all of us. It’s about time. I will be back soon – to try and entertain you, to push the envelope again. Till then, love you all,” Rani signs off.