Vijay Sethupathi will be in Superstar Rajinikanth’s upcoming film

This is big! After several weeks of speculation that Vijay Sethupathi will be playing an important role in Superstar Rajinikanth’s upcoming film, the makers have now finally made the official announcement.

A tweet from the official account of Sun Pictures read, “We are happy to announce that for the first time, Vijay Sethupathi will be acting with Superstar Rajini in #SuperstarWithSunPictures. #VijaySethupathiWithSuperstar.” It is likely that the Vikram Vedha actor will be playing the antagonist in the film. This would be the first time Vijay Sethupathi is sharing screen space with Rajinikanth and the combination is easily one of the most exciting ones we will see on screen. 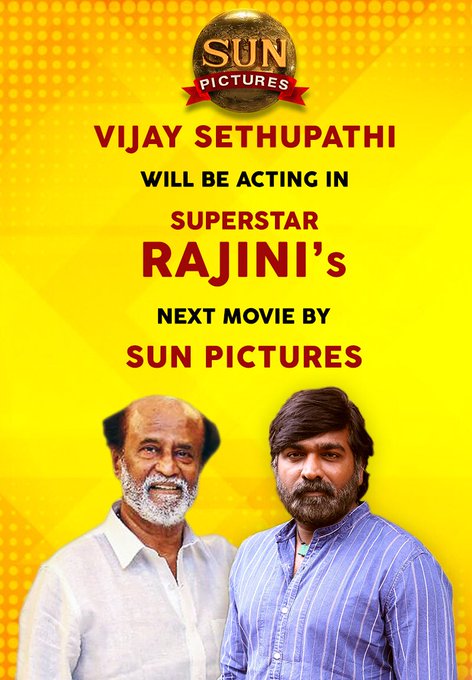 Vijay Sethupathi is currently shooting for another biggie, Mani Ratnam’s Chekka Chivantha Vanam. Tweeting a picture of the actor on sets, cinematographer Santosh Sivan wrote, “Awesome filming Vijay Sethupathi @ CCV shoot (sic).” Apart from Chekka Chivantha Vaanam, the actor currently has several projects in hand. He has also been brought onboard for the next project of Arunkumar, the director of Pannayarum Padminiyum and Sethupathi. The project will see Vijay Sethupathi share screen space with Anjali again. The project will be bankrolled by Yuvan Shankar Raja.

Report and write stories for Indianspice.co.za. It is our ambitious goal to cover issues/events/news concerning South Africa and the diaspora.
@spiceofi
Previous Hindi remake of Telugu flick Arjun Reddy will see Shahid Kapoor as lead
Next Priyanka Chopra talks about the royal wedding