A time when Jews ran the Bollywood industry

Ever since the first Jewish-run studios made cinema what it is today, Hollywood has, for better or for worse, long been associated with the Jews. Bollywood? Not so much.

The over-the-top action sequences and large-scale dance numbers of India’s massive Hindustani-language film industry are recognizable across the world, but most Westerners probably don’t know that many of the industry’s early female stars were actually Jewish.

These actresses include some of the most famous names in Indian cinema: silent-era star Sulochana; cousins Miss Rose and Pramila (who was also the first post-independence Miss India); and Nadira.

Now, their story is being told in a new documentary, “Shalom Bollywood,” now screening at Jewish film festivals worldwide.

“I knew there were Indian Jews, but that there were Jewish Bollywood superstars was a surprise,” Australia-based director and academic Danny Ben-Moshe told The Times of Israel in a phone call from Melbourne.

The surprises began for Ben-Moshe over a decade ago, when his research assistant showed him an obituary for Nadira, who died in 2006. Initially he wanted to make a film exclusively about her, but when he subsequently visited India for the first time, he learned that there had been other Jewish Bollywood stars and widened his focus.

“Someone would ask, ‘But what about Pramila?’ Someone else would ask, ‘What about Sulochana?’” recalled Ben-Moshe, who also produced and wrote the film. “Nadira was not just a great Jewish actress, she was the last in a long line of Jewish female stars in particular, that went all the way back to the earliest days of Indian cinema.” 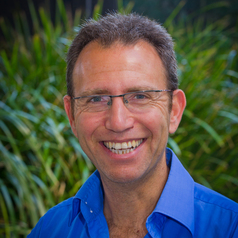 The project took 11 years to complete. Ben-Moshe obtained rare archival film footage from India and interviewed surviving family members of the stars — including Rose’s granddaughter Rachel Reuben and Pramila’s son Haider Ali, who are both in the film business themselves.

Ben-Moshe even found late-in-life interview footage of Pramila, who died in 2006, the same year as Nadira.

The film also explores the history of Jewish men in Bollywood, such as the late star David Abraham Cheulkar, known to fans as Uncle David. Ben-Moshe found film footage of Uncle David and interviewed his niece Diana Abraham and nephew Victor Abraham.

Ben-Moshe said that the film has been “really well-received,” including at its world premiere last October at the Mumbai International Film Festival.

“I imagined, for an Indian audience, it would be a different story and approach, but it had a very positive Indian response,” Ben-Moshe said.

A March Houston screening coincided with Indian art exhibits at the Museum of Fine Arts, Houston, and an Indian photography exhibition of the film’s subject matter at Congregation Beth Israel.

“I imagined, for an Indian audience, it would be a different story and approach, but it had a very positive Indian response,” Ben-Moshe said.

A March Houston screening coincided with Indian art exhibits at the Museum of Fine Arts, Houston, and an Indian photography exhibition of the film’s subject matter at Congregation Beth Israel.

Ben-Moshe has made films about Jewish subjects before. In 2014, he won Australia’s top documentary award, the Walkley Prize, for “Code of Silence,” about sex abuse in the ultra-Orthodox Jewish community. Other films have addressed the Buchenwald concentration camp, and rabbis in the Australian outback.

But when he embarked on “Shalom Bollywood,” he had not seen a Bollywood movie and did not consider himself an aficionado of the historic Indian film industry. Bollywood, according to online data, leads the world in terms of production. 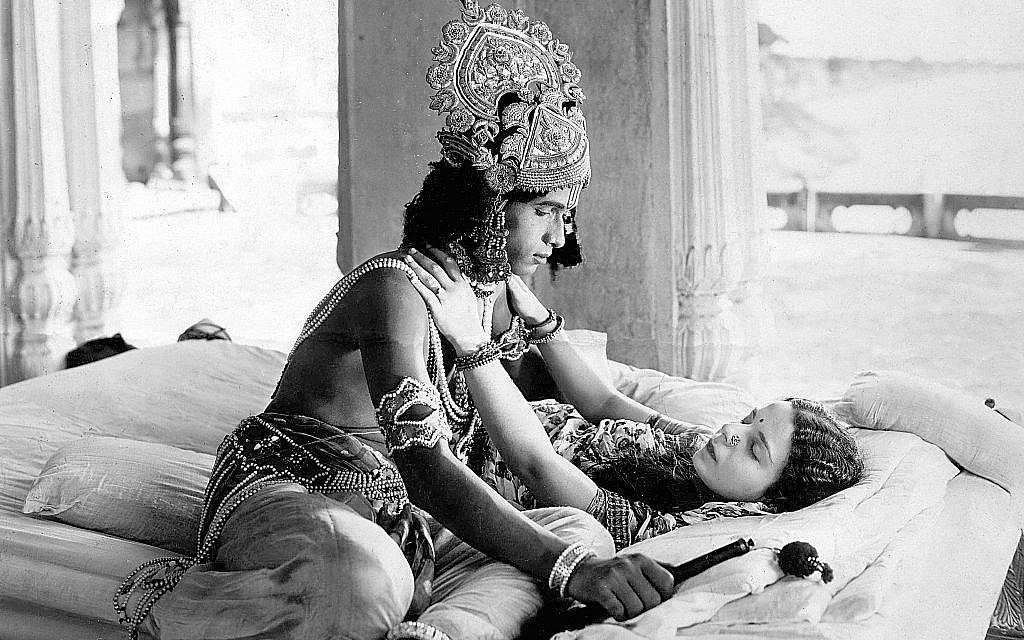 Ben-Moshe explored the complicated story of gender roles in the early days of Bollywood. As the film recounts, men played female roles at the outset, as it was taboo for Hindu and Muslim women to act in movies. This opened the door for Indian Jewish actresses.

The film details the story of Jews in India — including two historic communities: the Bene Israel and the Baghdadi Jews, whose roots lie in the Middle East, with an emphasis on the Iraqi capital.

Last year, Ben-Moshe was among those interviewed for the BBC podcast “Jewish Queens of Bollywood,” which delved into the origins and careers of its title subjects. According to this podcast, Baghdadi Jews came to India in the late 18th century and created a flourishing community in the 19th century. Its members spoke Arabic, Hebrew and English — but not necessarily Hindustani, which presented a problem for Sulochana when silent films transitioned to “talkies.” 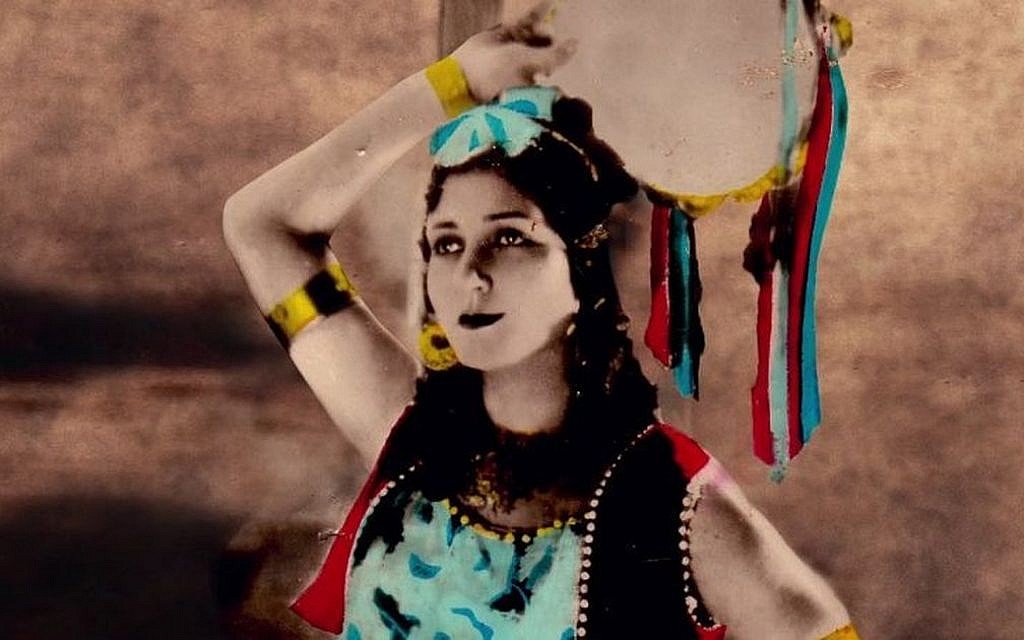 India’s burgeoning film capital was located on its west coast. At the time, it was called Bombay and, according to the podcast, would see its Jewish population number over 30,000 in the 1940s. The name “Bollywood,” a combination of “Bombay” and “Hollywood,” was first used in the 1970s.

“Mumbai is the film hub,” Ben-Moshe told The Times of Israel, referring to the city’s official name since 1995. He added that the presence of Jews in the metropolis meant that they would have “a big part to play” in the film industry.

The pioneer was Sulochana — born Ruby Myers in 1907 — who was improbably discovered while working as a telephone operator. 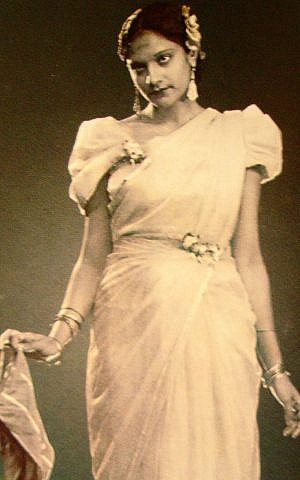 “A director was scouting out a venue [for a film],” Ben-Moshe said. “He was blown away by her looks, her eyes.”

In fact, her new stage name meant “the one with the beautiful eyes.”

“Life is often chance and circumstance,” Ben-Moshe reflected. “Had she not been working there, had he chosen a different location, maybe things would have evolved differently and there would have been no Sulochana.”

Audiences were amazed by this versatile actress, who played eight roles in the 1927 film “Wildcat of Bombay” — from a gentleman from Hyderabad to a street urchin to a European blonde.

Off the set, she was reported to have driven India’s first Rolls-Royce, and to have out-earned the British viceroy. Mahatma Gandhi included her image while campaigning for Indian independence from the British Empire.

Sulochana was joined by other Indian Jewish actresses. Miss Rose, nee Rose Ezra, had endured a divorce and financial difficulties before finding silent-screen success in the 1920s. Rose’s cousin Pramila, who was born Esther Victoria Abraham, began her long career in the 1930s. Sulochana and Pramila would go on to become producers as well. 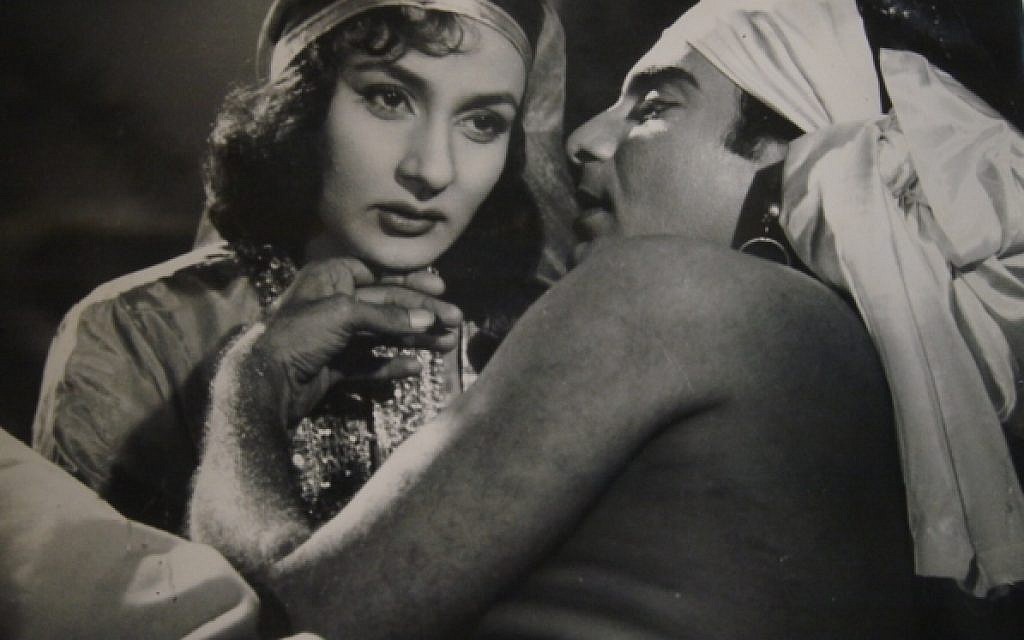 The ‘30s were a key decade for Indian cinema. Sound — and the dancing format that has characterized Bollywood ever since — was introduced in 1931 with “Alam Ara,” written by Indian Jewish playwright David Joseph Penkar. In 1932, another Indian Jew, Ezra Mir (born Edwin Myers), created a sensation with “Zarina,” which included a record 86 kiss scenes.

The next decade brought partition with Pakistan and independence from Great Britain in 1947. That year, Indians had a national heroine to celebrate when Pramila became the new country’s first Miss India. 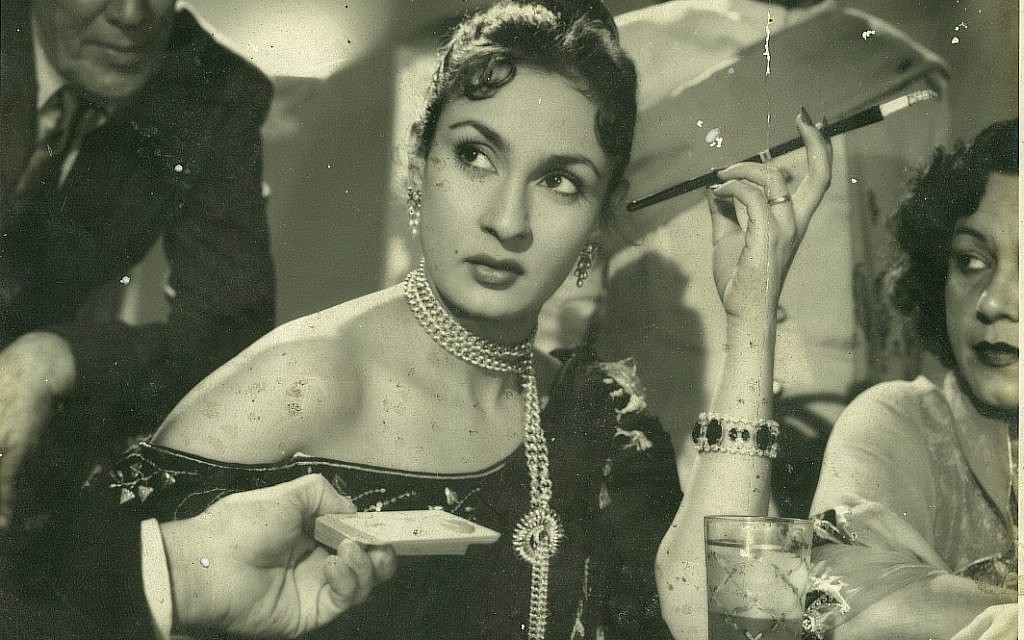 “They would go where others were not prepared to go,” Ben-Moshe said of the actresses. “They were sassy, uninhibited. They would not just go on screen, they would embrace that other role, the vampy role. They were self-confident, brave, pioneers, larger-than-life characters.”

But Ben-Moshe said that finding film footage of these actresses is difficult.

“Of the Sulochana and Rose films from the silent era, the ‘20s, there was nothing,” Ben-Moshe said.

“From the ‘30s films of Rose, Sulochana, Pramila, there was a little bit. Basically, Nadira, of the Jewish stars, is the only one with a comprehensive collection of film, and David [Uncle David]. It’s a shame. It’s Jewish cultural heritage, Indian cultural heritage,” he said. 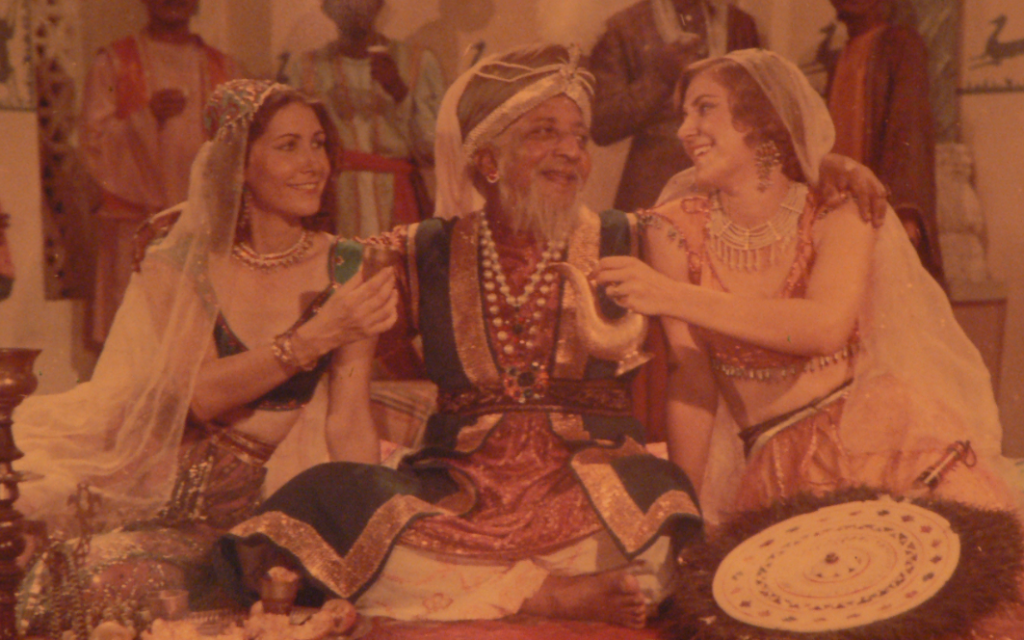 Pramila taught the Shema to her son, actor-director Haider Ali. In the film, he praises his mother’s Jewish cooking, and shares her recipe for Moroccan chicken soup.

“They [the actresses] went to synagogue or kept certain [customs] on the High Holidays,” Ben-Moshe said. “Nadira used to wait, when she was older, for the Shabbat meal, which was brought from the local community.”

And, he said, “They had no problem being Indian as well. It’s such a diverse society.”

Pramila married Muslim Bollywood star Kumar (Syed Hassan Ali Zaidi), and their children grew up in an interfaith household, although the marriage foundered when Kumar went to Pakistan following its independence, according to the film. 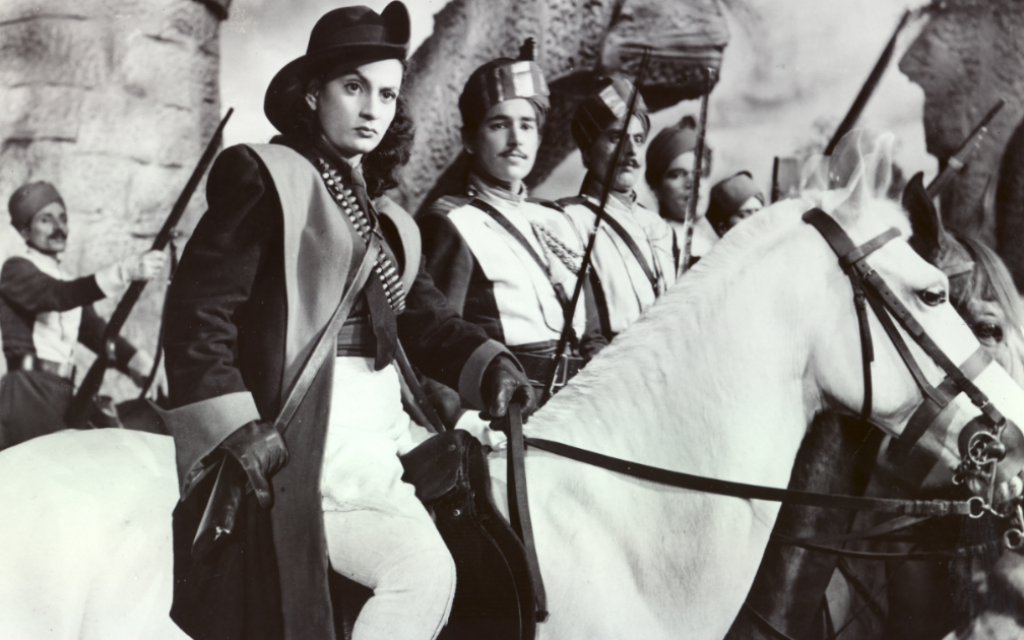 In India, Ben-Moshe said, “There are so many different languages, regions, religions, castes… India is unique in the world, with no history of anti-Semitism.”

However, after Indian independence, the majority of its Jews emigrated. Nadira’s family moved to Israel, as did many other Indian Jews. Today, Ben-Moshe said, there are hardly any Jews left.

Many Jews in Bollywood would find recognition from their country, including national awards. Sulochana would be honored with India’s highest cinema award, the Dhabe Phalke, in 1973, and with a postage stamp after her death in 1983. But she and other Jewish stars faced difficulties later in life, including poverty and loneliness, as opportunities disappeared.

Asked about prospects for a next generation, Ben-Moshe said, “My prediction is that the history has already been written. But it only takes one [to create a new trend].”

And, he said, “Shalom Bollywood” has “spurred curiosity, more talk and discussion about the films of Jewish stars.”

Report and write stories for Indianspice.co.za. It is our ambitious goal to cover issues/events/news concerning South Africa and the diaspora.
@spiceofi
Previous Let’s talk about Menstrual Hygiene today
Next Chatsworth residents rise up in protest against crime

How to celebrate Nowruz, the Parsi New Year