The Inkatha Freedom Party (IFP) have publicly condemned the online hate speech posted by a Facebook account last week, which called for Indians to either “go home or be killed”.

The page – ran under the name of “Nkuleko Mkhize” – even sank as low as to mention the tragic death of nine-year-old Sadia Sukhraj.

Sadia was shot dead during a botched hijacking attempt in Chatsworth, KwaZulu-Natal. Mkhize showed no restraint in promising the Indian community that the same would happen to them if they didn’t leave for India: 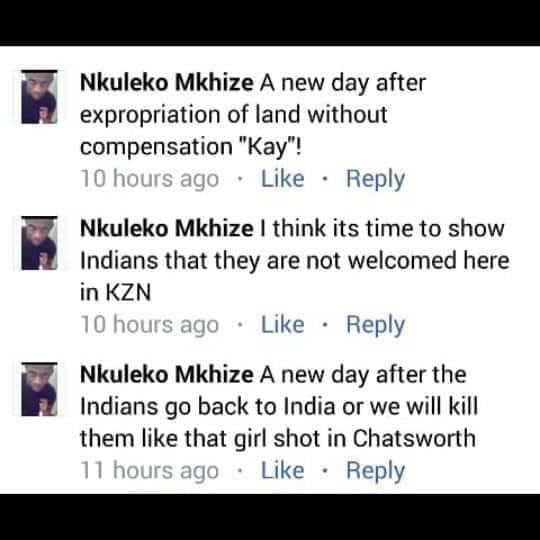 The IFP – who have enjoyed brilliant poll results in KwaZulu-Natal – weighed into the debate on Monday afternoon. Refusing to let this one slide, Chief Whip Narend Singh moved to immediately slam the abhorrent post.

In his statement, Singh condemned the “unacceptable” message and promised to use “newly set legal precedent” to bring the person behind the account to justice:

“Racism and hate speech have no place in our democratic society. We have many examples of and newly set legal precedent which will see Nkululeko Mhkize face the full might of the law.”

“It is unacceptable to call for the killing of anyone or any race. Mhkize’s calls in his Facebook post for the Indian people of KwaZulu-Natal to go to India or be killed, shows his clear lack of understanding our country’s political history.”

“The IFP will take strong action against Mhkize. We will make an announcement in this regard this week.”

Back in April, Vicki Momberg became the first person in South Africa to be jailed for using racist language. Her rant – where she called a police officer “the K word” 48 times – landed her a two-year stretch in prison.

Last week, a bill proposing that hate speech should be made a criminal offence was presented in Parliament. Though the law is still under review, it would seem like the government are considering its adoption.

Report and write stories for Indianspice.co.za. It is our ambitious goal to cover issues/events/news concerning South Africa and the diaspora.
@spiceofi
Previous Paresh Rawal to play Indian PM Narendra Modi in a biopic
Next Entrepreneurship: How to start a creche or daycare business

Funeral Strike Comes To An End in South Africa