The human supercomputer not only pushed for the minds of humanity to breach their capacity, but for irrational beliefs and LGBT prejudices to be challenged as well. The words “Shakuntala Devi”, “maths” and “rapid calculation” are synonomous.

Be inspired and watch ‘Shakuntala Devi’ (2020) on Amazon Prime. It will inspire you and you’ll put your daughters and sons in front of the screen to watch it. But beware, there was a price to pay for passion and maths genius that you will see in the film.

Math genius Shakuntala Devi is a household name today since Vidya Balan decided to step into her rather large shoes. But there’s a less-talked-about side to her that needs more attention.

The year was 1977 when in one corner of the world, at Southern Methodist University in Dallas, Shakuntala Devi successfully extracted the 23rd root of a 201-digit number. Jaws dropped as she managed to do it in just 50 seconds, faster than a Univac computer. She made headlines and broke records. On the other end of the world in India, the same year, she was making headlines and breaking records, too. But this time not (just) for her calculations, but for her compassion. And a book, The World Of Homosexuals.

Homosexuality was decriminalised in India in 2018. Before that, it was looked at as a perversion, a condition, an anomaly, and something that needs to be cured. It doesn’t take a rocket scientist – or a Guinness Book Of World Record-holding mathematician – to understand that Shakuntala Devi’s book created quite a stir.

The book was never brushed aside, but it was never allowed to take the centre stage either in the list of Shakuntala Devi’s achievements. Just another example of the society’s attempt to choke a free-flowing conversation about homosexuality. 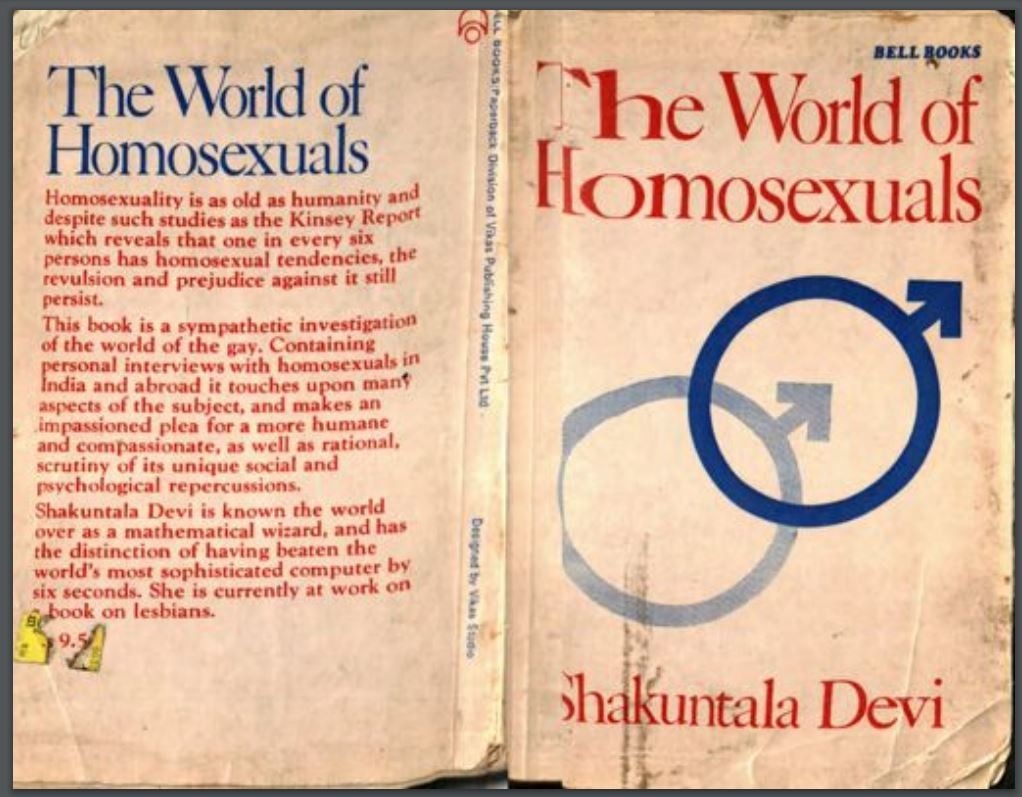 The World Of Homosexuals book cover.

The impetus behind the book was a very personal one. Shakuntala Devi married Kolkata-based IAS officer, Paritosh Bannerji, in 1960. The marriage soon fell apart when Bannerji’s homosexuality was revealed. For many, it could have been a crushing revelation that would lead to resentment. For Shakuntala Devi, however, it worked as a catalyst, helping her delve deep into her humanity.

She realised that most human conflicts arise from ignorance and prejudice, stemming from the inability to accept another human as human, in totality. In the book, she challenged the notion that homosexuality is immoral. She added that those who disrespect, discriminate and mock people on the basis of their sexual preferences are, in fact, immoral and should look within themselves.

What makes her qualified enough to write about homosexuality? Can a heterosexual truly understand the plight of another who is forced to live in the ‘closet’ so to speak, hiding and dodging prying eyes? Shattering this ‘us versus them’ wall, she writes in her book that her only qualification is that she is a human being. Did anyone really think of it like that?

Shakuntala Devi’s book, The World Of Homosexuals, is perhaps the first book written in India demanding decriminalisation of homosexuality. This was over three decades before LGBTQ rights and Section 377 even became a part of the general discourse in India. Even before Mira Nair showed us that a love story need not have ‘homosexual’ or ‘heterosexual’ attached as a prefix and before Karan Johar made a mockery of it.

Shakuntala Devi is now a household name since Vidya Balan decided to step into her rather large shoes. The biopic, Shakuntala Devi Human Computer, is the story of the math genius. The emphasis, therefore, is on her superhuman ability to multiply, divide faster than the speed of light. Indeed, it is a story worth telling. Indeed she is a figure worth all the attention. But perhaps, her humanitarian side needs as much attention, if not more. She, was, after all, the first gay rights activist, even before we had collectively coined the term. Will we see this side of her in the biopic?

Naufal Khan was the Publisher at ADISHAKTI MEDIA and the editor-in-chief of the South African Indian news service Indian Spice. Khan was former Sunday Times journalist and also an occult fiction and non-fiction writer with several published titles.
@naufalkhan
Previous Women’s Rights in Bangladesh have flourished since independence 🇧🇩
Next Sadhguru launches mobile game – Kari and the Lost Shrines – to promote temples

WATCH: Never have I ever: the Season 2 review

Um..does Netflix have an Indian problem?